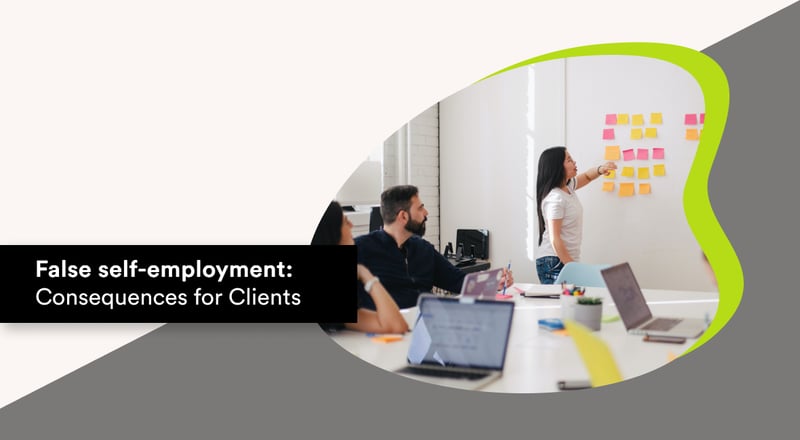 Scheinselbstständigkeit (also known as false self-employment or bogus self-employment) is an issue in Germany, which means that a freelancer works for a company as a self-employed person, but is actually treated like an employee. The consequences of false self-employment are very unpleasant for clients: they have to make substantial additional payments for social security contributions and taxes, and they may also be subject to penalties. That is why companies should not take the issue lightly.

Why is Scheinselbstständigkeit a problem?

There are clear differences between salaried employees and self-employed people. For example, the former have health insurance through their employer and pay into the national pension fund, while the latter often have private health insurance and must provide for their own old age. From an organizational point of view, the employee is bound by instructions and integrated into the employer's processes, whereas the self-employed person enjoys more freedom, but also bears an entrepreneurial risk.

In the case of false self-employment, clients practically receives the services of an employee, but only pay a freelancer's fee. They save on social security contributions and also don’t pay continued remuneration in the event of vacation or illness. The contractors receive less security than they would actually be entitled to, while at the same time benefiting from higher income than an employee. For this reason, bogus self-employment is considered by lawmakers to be a form of black labor, and controls are in place to identify cases.

For more information on false self-employment in general, see our article "False Self-Employment: Criteria 2022 and Checklist".

When is False Self-Employment Investigated?

Since freelancers are self-employed, they use their own work equipment to complete the orders and are not provided with it by the client. They also work in their own office or in a coworking space, but not on the company's premises.

Avoiding Scheinselbstständigkeit: Contract is not Enough

There are various ways in which a check for Scheinselbstständigkeit can occur. Clients or contractors can initiate it themselves, but it can also take place through a complaint from outside or through a standard audit. It can also happen that a freelancer tries to sue for a permanent position in this way. Therefore, it is especially important to work with trustworthy freelancers - the kind CodeControl provides.

Often, the audit is carried out by the German Pension Insurance (Deutsche Rentenversicherung) as part of a regular company audit. However, it can also be carried out by the tax office, a labor court or a health insurance provider. Another instance is the “Finanzkontrolle Schwarzarbeit”, a part of the main customs offices in Germany.

What Happens if Bogus Self-Employment is Discovered?

The consequences of a detected false self-employment cover various aspects: In terms of social insurance and tax law, clients must make additional payments. In terms of labor law, the contractor is retroactively entitled to certain benefits that salaried employees receive. In particular, salaried employees also enjoy legal protection against dismissal. And further legal consequences for the client are also possible - up to and including a custodial sentence. Those who are aware of the consequences will in many cases do everything they can to avoid bogus self-employment.

It is also important to remember that bogus Scheinselbstständigkeit can be intentional or unintentional - it often only arises over time, when the freelancer takes on more and more tasks and becomes increasingly involved in the company. However, ignorance is no excuse. Clients must take care to comply with all regulations.

These are the consequences if a bogus self-employment is detected:

The unpaid social security contributions are now due retroactively, for up to four years. This can result in a considerable sum for the client, especially since late payment penalties are added. Clients can claim a portion from the contractor (who is an employee by then), but only if an employment relationship actually exists and only for the next three salary payments.

The unpaid wage tax must be paid in arrears; here, too, the period is four years. At least both sides are jointly liable here, so the client does not have to bear the entire burden. If intentional bogus self-employment is assumed, however, the statute of limitations increases to ten years, and it becomes a criminal offense. The sales tax charged and thus also the input tax are no longer valid and a reversal must take place.

The consequences of a false self-employment in terms of labor law may be that the previous contractor becomes an employee. They can even assert this status in court. If they are successful, they are entitled to continued payment of wages in the event of illness as well as paid vacation, and they benefit from dismissal protection.

The additional payments of social security contributions and taxes for possibly several years are already a heavy burden. However, it becomes even worse if the client is accused of acting intentionally. Then a fine or even a prison sentence is possible. In addition, the period for which back payments must be made increases to up to 30 years.

The Consequences of Scheinselbstständigkeit for Freelancers

For the affected freelancer, the identification of false self-employment doesn’t have only negative consequences. They can sue the company to get a permanent position and become an employee - with all rights and obligations. Thus, they receive, for example, vacation entitlement and protection against dismissal.

On the other hand, they must pay wage tax and possibly part of the social security contributions in arrears. In addition, the sales tax charged on the invoices must be reversed, which is tedious and complicated. How negatively freelancers view the consequences of bogus self-employment depends on their personal circumstances. However, the consequences are less severe for them than for the company.

Who Bears the Risk of Bogus Self-Employment?

The consequences of false self-employment are unpleasant for both sides. However, clients have to fear the economically more severe consequences, so their risk is often higher. This is because the payments they have to make can threaten the existence of the company. Social security contributions and taxes for several years plus late payment penalties quickly reach dangerous levels.

There is also a certain probability that the company has worked with several freelancers in the status of bogus self-employment. These relationships are then also audited and the costs multiply. In the case of intent, there is also the threat of a fine or even imprisonment, which a freelancer does not have to fear. It is therefore particularly important for companies to be careful. 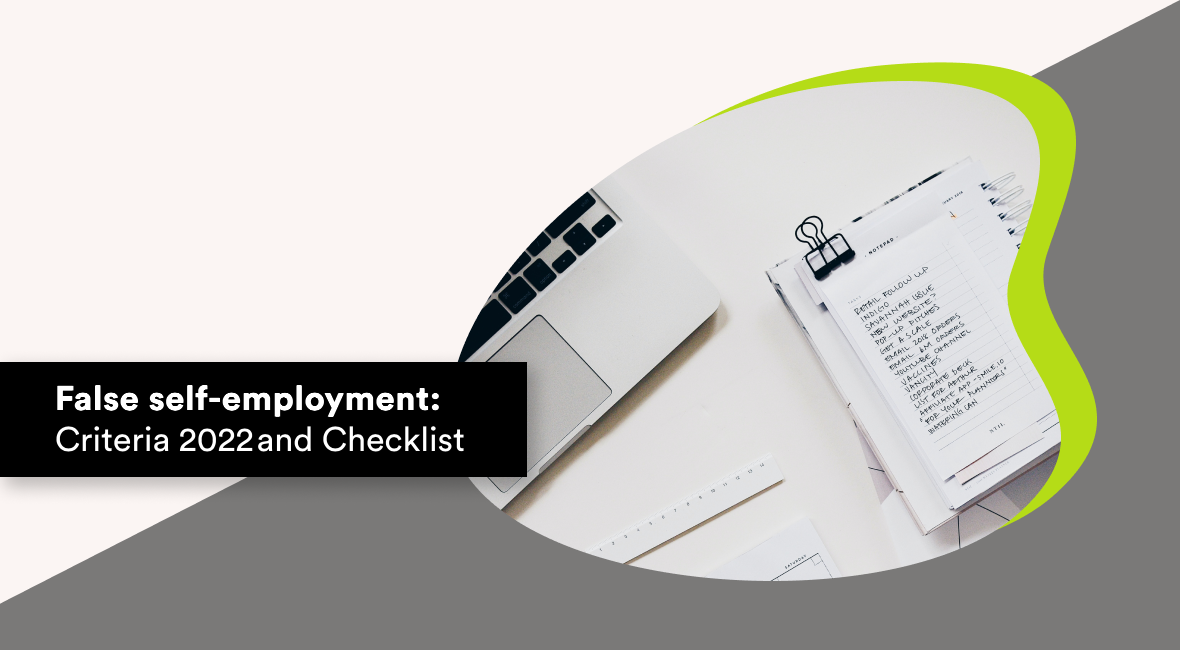 False Self-Employment: Criteria 2022 and Checklist
What is false self-employment, what are the consequences and criteria in 2021? The answers and a checklist are available here. 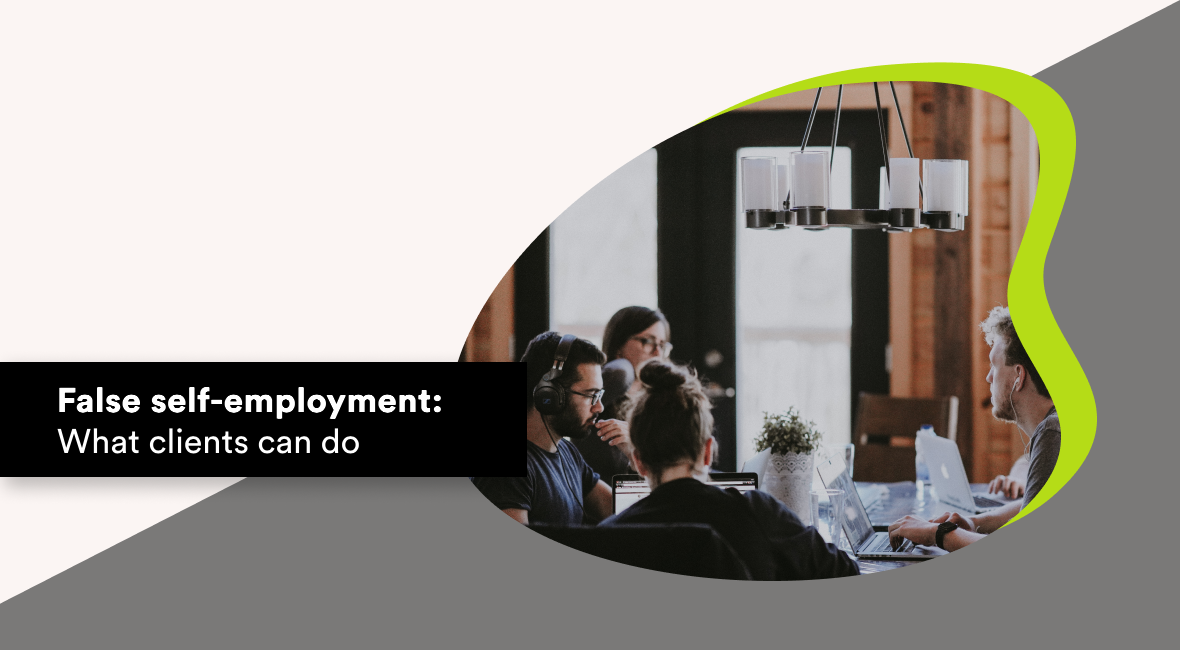 Avoid False Self-Employment: Tips for Clients
It is important for companies to avoid false self-employment among their freelancers. We explain which factors need to be taken into account.